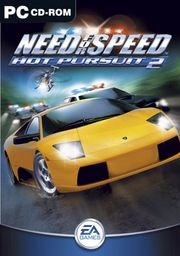 Need for Speed, the award-winning arcade racing game, is back and better than ever in Need For Speed Hot Pursuit 2!

Staying true to its heritage, Hot Pursuit 2 houses a stable of exclusive, exotic cars from the world's most coveted licensors including Ferrari, Porsche, Lamborghini, Aston Martin and McLaren.

It is the last title in the Classic Era of NFS and won the Console Racing Game of the Year award in 2003 and was also notable for its more HD graphics at the time compared to previous installments, as well as helping popularize NFS before Underground.

Two different versions of the NFS:HP2 were produced. The Xbox, GameCube and PC version were developed by EA Seattle, a subsidiary of EA Canada, while the PS2 version was developed by the newly acquired Black Box Games in Vancouver, B.C. Canada. While there are many similarities in overall design and theme, the two versions have a wide range of differences. A large list of these can be found on the Need for Speed Hot Pursuit 2 Versions Comparison page.

The PS2 version is widely held to be the superior game, with that version drawing 9/10 from most reviews, while the PC/GC/XBox version generally pulls 7 or 8 from 10.

The game features two main modes of play; Hot Pursuit where you compete with fellow racers and contend with cops along the way, and World Racing, in which you race against other racers without any interference from the police. Within these two main modes, gameplay is split further: