For those who still seek the thrill of NFSW.....

There is a rebooted version online, still buggy and not fully functional but we can play the game, buy all with IGC so no boost needed!! 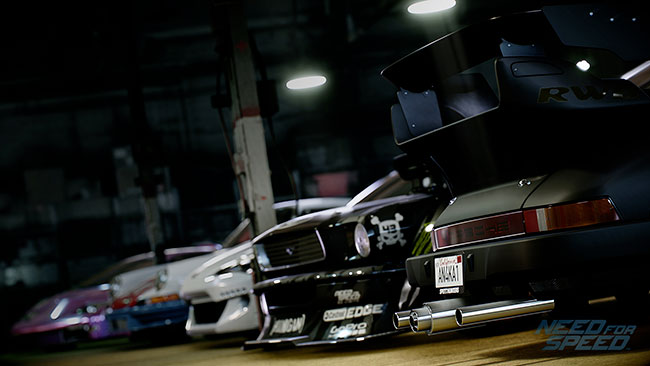 Since we released Need for Speed last November, we’ve been humbled by the support from our players and the ongoing collaboration with you. We have learned so much from your feedback, and much of that has gone on to shape the free content updates to NFS. Features such as Manual Transmission, Wrap Sharing, Snapshot Pro, SpeedLists, Customization items, bigger garage and more came directly from your suggestions. We’ve also introduced Hot Rods, saw the return of Drag Racing, and you once again went toe-to-toe with the infamous Eddie.

Since Need for Speed made its return, you've spent a massive amount of time on the roads of Ventura Bay. You’ve collected over 9.8 billion REP points, taken over 35 million Snapshots, raced in over 10 million Drag Races, and beaten a total of 52 million Eddie’s Challenge Events. You’ve spent a stunning 950 million minutes customizing cars, no doubt helped with the $2.5 trillion in-game cash earned. You’ve shared more than 700,000 wraps, resulting in more than 13 million downloads by your fellow NFS fans.

The SpeedList update will be our last free content update for this game. Make sure you're still earning bonus REP, taking advantage of discounts or earning some extra in-game money from all the upcoming Community Events. The next one starts this weekend, so hit the streets of Ventura Bay and earn yourself an extra $1,000 in-game credits from all Drag Events. Also, keep taking your personalization to the next level and build up your decal collection by completing the Daily Challenges, and with more than 150 on offer, there’s definitely something for every ride.

We are now building upon the foundations that have been laid with Need for Speed and delivering our next game in 2017.

That’s not to say that we’re going quiet between now and then... far from it. We'll be working with our community and there will be multiple opportunities to bring many of you into the studio in the coming months to get your feedback on where we're headed.

The feedback our Community has already given us is already shaping the future of Need for Speed, and it will continue to do so as we move further into development of the next game, so please do keep it coming. Send us your Tweets, drop us a comment on Facebook or stop by our newly launched forums.

Your passion and dedication for Need for Speed continues to motivate, inspire and drive us forward. It's absolutely amazing. From all of us at Ghost, thank you.
Source : http://www.needforspeed.com/news/under-the-hood-7

Competitive Multiplayer, Prestige Mode and Activities are rolling into the next Living Game update,
coming April 27th for PS4, Xbox One and PC. 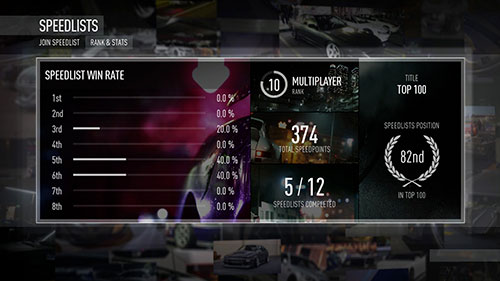 Multiplayer is an area that we know many of you are deeply passionate about, and we’re really excited to be bringing you SpeedLists, a feature which builds upon that competitive gameplay you’ve been requesting.

SpeedLists are a series of five pre-selected events that you compete in against other human opponents. Getting into the action is quick and easy, simply select the new SpeedList tile from the main menu, chose from Quick Play, Speed, Style or Mixed, and away you go.

At the end of each event you'll gain points for the place you finish. Then, once all events have been completed and the points tallied up, the final standings are displayed and the best racers shown off in a short cinematic sequence.

Once the winner has been crowned, the action starts again, meaning for those that enjoy competitive multiplayer racing, SpeedLists will quickly become the go-to choice.

As you play SpeedLists you’ll soon find yourself awarded one of the titles below based on your overall position within the NFS Community. Be warned though… there can only be one World Champion.

Play Need for Speed on PC early!
Need for Speed launches onto PC on March 15th and members of Origin Access can play before it’s released!
______________
Starting March 9th, members can download the full game and take to the streets on their journey to become the Ultimate Icon. Get behind the wheel of iconic cars and floor it through the sprawling urban playground that is Ventura Bay. With an extensive range of visual and performance modifications, you can build a car to reflect your own character and style.

Experience Need for Speed for the first time with an unlocked frame rate and at 4K resolution, only on PC. Plus, combine manual gears with steering wheel support for an exciting new Need for Speed experience.

Experience Living Game updates such as the return of Eddie, who's put together a list of the hottest street racers in Ventura Bay with your name on! Earn enough REP and Melissa will be in touch as you look to compete in a series of knock-out events to earn a shot at Eddie himself.

The Play First Trial gives members ten hours to experience Need for Speed. The ten-hour clock only ticks when the game is open, so if you want to conserve your time, make sure you close the game when you're finished playing. If you head back to the streets once Need for Speed releases on March 15th all of the progress you make carries over.

Prepare your hardware for NFS on PC

Last week was an exciting time for us as we lifted the lid on the PC version of Need for Speed, coming March 17. Amongst all the excitement and discussion you've been having about 4K visuals, Manual Transmission, Wheel Support and the unlocked framerate, there's one topic we see popping up with some frequency. Below you'll find not only the minimum and recommended system specs but also the list of supported steering wheels.

NEED FOR SPEED ON PC Coming March 17th
We’re incredibly proud of how good Need for Speed looks visually, a sentiment we know many of you share, and we’re excited to show you the game running at a higher frame rate. Seeing is believing so we’re hoping when you see and play Need for Speed running with an unlocked framerate and at a 4k resolution you’ll be just as excited as we are.

The extra development time has allowed us to create the definitive NFS PC experience. One of the burning topics of discussion amongst our Community has been the inclusion of Manual Transmission - we can now confirm this will be in the game when Need for Speed launches on PC.
With the release on PC we're also adding steering wheel support for a selection of wheels from Logitech, Thrustmaster and Fanatec. As with Manual Transmission this is a decision taken based purely on Community feedback. We’re dedicated to bringing you the best Need for Speed experience possible and your feedback has been playing a huge role in that.
When Need for Speed launches on PC it will also contain all the improvements and tweaks we’ve made up to now, including both the Icons and Legends updates from day one. The Showcase update is currently scheduled to arrive on PC shortly after launch.

This decision on PC gives us the necessary development time to increase the visuals that we can deliver on PC. We will also include content updates that will have been released on console up to that time, making them available to all PC players from day one.

PS4 and Xbox One are still scheduled for November 3rd (North America) and November 5th (rest of the world).

I attended gamescom last week and got a chance to play this year's Need for Speed and talk to the producers for additional insights on what the game will bring this holiday season.
It is all summed up in this article. If you have any additional questions, post them in the comments and I'll try to answer the best I can.

If you are really impatient, here is a summary of a summary:
Quote:

Need for Speed shows promise this year, this is for sure. I am actually pretty excited about the game as it is deviating away from the standard model of Rivals and Most Wanted 2012. It is trying to bring something fresh, or at least something not seen in a decade, back to the series and I really hope the full game coming out this holiday season will deliver.

More news is available in our news archive. View news from other NFS websites.